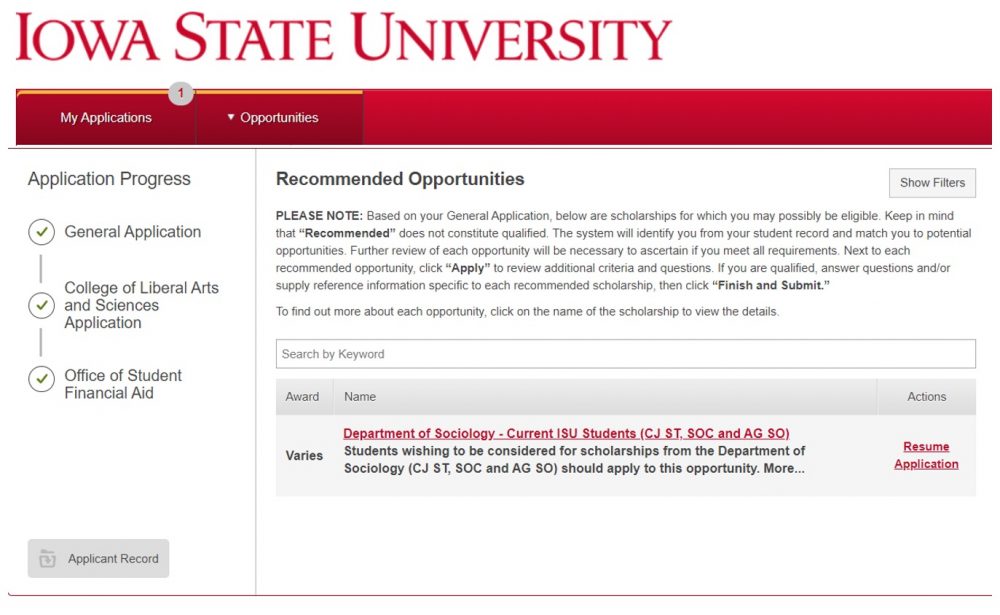 After applying through OneApp, all students will be considered for all scholarships for which they are eligible university-wide.

Department of Sociology and Criminal Justice scholarships and awards are given to encourage and recognize outstanding scholarship and achievement in the field of sociology, rural sociology and criminal justice. Details regarding a specific scholarship are listed under the scholarship/award title.

If the recipient is not registered/enrolled/paying tuition during a semester (due to an internship, graduating fall semester, etc.), or the recipient changes majors, payment is not made for that portion of the scholarship. Undergraduate students, unless specified, must be enrolled as full-time students, and graduate students are expected to actively be involved in the graduate program in residence (on the ISU campus).

One of the goals of AKD has been to stimulate scholarship through publication. The first publication of the organization was The Quarterly, established and edited by Dr. Bogardus from 1928-1932. The Quarterly became the Alpha Kappa Deltan: A Sociological Journal.

The purpose of the honor society is to promote scholarship, but the focus has always been fellowship for students, both at the graduate and undergraduate levels. Conferring a charter signifies that the institution meets high standards of program quality and scholarship.

Student scholarship in AKD is recognized in several ways. The Society sponsors student travel to regional meetings, supporting those who want to present their own work and learn from the scholarly presentations of others. The Society sponsors annual student paper contests, presenting awards which include monetary prizes, travel support, and scholarships. In addition, by funding research symposia and honoraria for guest speakers, the Society supports chapter activities which further education. The Society continues to recognize scholarly excellence in sociology by inducting approximately 4,000 lifetime members each year.

The George Freeman Memorial Scholarship was established in 1953 in memory of George Freeman, a former Ph.D. candidate in Sociology at Iowa State University.

Freeman was born February 22, 1912 in Kansas City. His father was a railroad brakeman, and his mother was one of the first black teachers in the Kansas City elementary school system. He graduated with a bachelor’s degree in agriculture from South Carolina State College in 1935, where he was a football and basketball star and a campus leader. He was married in 1939.

After teaching at the high school level and working as a supervisor of a National Youth Administrative Camp, he entered the armed forces in 1942 and served in the African, European and Pacific theaters in the Quartermaster Corp during World War II. After the war, he entered Kansas State University, received his M.S. in 1949 and enrolled at Iowa State in the fall of 1949.

He was active in many campus organizations, served as President of the Gamma Chapter of Alpha Kappa Delta (the sociology honorary), and was head resident of Friley Hall in addition to his teaching duties and graduate studies. He was the first black person on the instructional staff at ISU. His predecessor, George Washington Carver, had been on staff as a researcher and scientist.

George Freeman died May 8, 1953 before completing his Ph.D. He was a diligent student, a dedicated humanitarian, active in many organizations but especially interested in interpreting and helping people better understand Black Americans. He believed he had to demonstrate by action and example competence as a representative of a minority group. After his death, his relatives and friends at Iowa State and from many parts of the United States set up and contributed to the George Freeman Memorial Scholarship.

Eric O. Hoiberg was born March 30, 1944 in Fayette, Missouri. He received his B.A., M.A. and Ph.D. degrees from the University of Nebraska, Lincoln (in 1966, 1969 and 1973). He joined the ISU Department of Sociology in 1974 and served for 21 years as a faculty member and as the advisor for and coordinator of the Public Service and Administration in Agriculture Program (1974-1995). In 1995 he became the Associate Dean for Academic Programs in the College of Agriculture where he remained until his retirement in 2004.

Sadie Gardine Lasley (1905-1992), the daughter of a pioneer farm family in Schuyler County, Missouri. She received a teaching certificate from Northeast Missouri State Teachers College, now known as Truman State University, where she embarked on a teaching career until her marriage. When expecting their first child, she had to quit teaching (in those days, pregnant women were not permitted to continue teaching). She devoted her life to the family farm, and raising her own family including some of her grandchildren one of whom was Paul Lasley (Professor of Sociology, who served as Department Chair, 2002-2015). She helped raise Paul and his five siblings so that Paul’s mother could work outside of the home to help make a living.

Sadie Lasley’s life reflected the central sociological values of community, neighbors and family. She led a humble and modest life that focused on giving to others. She was a strong proponent of equality for everyone, which was perhaps influenced by the rural sociology course she took at NE Missouri Teachers College in 1924. Throughout her life, she wrote short stories and editorials for a wide variety of farm magazines, ladies magazines and newspapers. These writings date from 1929-1987.

This scholarship was created by Sadie’s grandson, Paul Lasley, to award a promising undergraduate or graduate student in the Sociology Department who best represents Sadie Lasley’s ideals. The recipient must demonstrate leadership, community volunteerism, and evidence of a passion to help others.

Not available this year.

The Courtney Tené Leonard Scholarship was established in 2020 by her parents Randall and Lisa Leonard in memory of their daughter Courtney Tené Leonard. Courtney graduated in 2012 with a Bachelor of Arts in Interdisciplinary Studies: Criminal Justice. She was a devoted Cyclone, attending many Cyclone sporting events. Courtney passed away unexpectedly in 2017.

Mary W. Lees was born December 30, 1926 in Howard, Kansas. She received the B.A. in sociology from the University of Kansas in 1949 and after being married and raising seven children, she enrolled at Iowa State University as a nontraditional student in 1971, receiving the M.S. degree in sociology in 1973. She became the undergraduate academic advisor in the Department of Sociology in 1973.

Mary was active in campus activities and in 1978 was named Outstanding Academic Advisor by the ISU Student Alumni Association and was given the ISU Excellence in Advising Award as well. In 1985 she was named Outstanding Advisor for the College of Sciences and Humanities; she received the ISU Alumni Distinguished Service Award, and the Office of Student Life recognized her for her contributions to the university community in the area of human relations.

Mary was also very involved in activities of the United Methodist Church at the local, district and conference levels, including committee work and serving as a part-time lay pastor for several years. Memberships included the American Sociological Association, the National Council on Family Relations, the National Organization of Women, the American Civil Liberties Union, the Iowa Civil Liberties Union, the Daughters of Sarah, Chapter CZ of PEO, and Phi Beta Kappa.

Mary Lees was a beloved student advisor and mentor until she died of cancer in June, 1986. Before her death, she negotiated the establishment of this scholarship in her name to assist nontraditional female students returning to college.

George Von Tungeln was born and raised on a farm near Golconda, Illinois. He received a bachelor’s degree in 1909 from Central Wesleyan College, Warrenton, Missouri, an M.A. in 1910 from Northwestern University, was a fellow at Harvard from 1911-1913 where he also received the Ph.D. He was one of the early pioneers in rural sociology and has been closely associated with its expansion in the United States.

In 1913, Dr. Von Tungeln was hired as an assistant professor of sociology at Iowa State College in the Department of Economic Science to teach two courses in sociology and one or more courses in economics. These first two sociology courses were rural sociology and applied sociology.

Dr. Von Tungeln initiated the first formal rural sociology research project with Agricultural Experiment Station funding at Iowa State College in 1915. In this project he introduced an element in his phase of farm tenancy which later became standard in all states and in the federal censuses (classifying tenants as (1) those related to the land owner, and (2) those not related to the land owner).

In 1919, Dr. Von Tungeln was one of a committee of 24 called to Washington, D. C. by President Wilson, through Secretary of Agriculture Houston, to discuss the possible organization of a Rural Life Study Section in the Department of Agriculture and to formulate a program and policy of work for the same, if it was decided that such a section should be organized. The organization of the Section on Farm Population and Rural Life Studies, USDA, came as a result of this committee’s work and counsel with the secretary of agriculture. In 1934 he was elected Chair of the Rural Sociology Section of the American Sociological Society. During his term of office he was instrumental in organizing the Rural Sociological Society. He was also a member of the committee which organized the Midwest Sociological Society.

Extension work in the department was begun in the field of rural sociology in 1921. Activities included conducting rural leader training schools, helping rural groups to organize and develop community activities and programs of service, providing program service help and direction for organizations, development of state programs and standards for rural group activities, and helping with the correlation and coordination of rural organizations’ activities in the state.

By 1932, Dr. Von Tungeln was Head of the sociology section of the department which had been renamed the Department of Economics and Sociology. There were 14 sociology courses being offered with an annual enrollment of 700 students. Four national organizations had asked sociology staff to assist them with their research: 1)The Committee on Cost of Medical Care; 2) Social Science Research Council; 3) President Hoover’s Commission on Social Change and Social Trends, and 4) National Probation Association of America.

Dr. Von Tungeln died suddenly and unexpectedly of a heart attack on April 6, 1944 at 61 years of age as he was completing his thirty-first year as a member of the Iowa State College faculty.